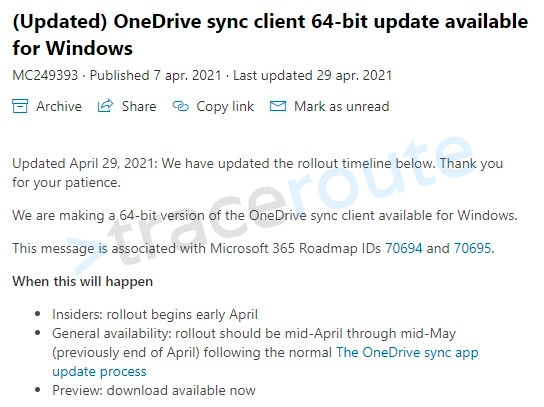 By Ernest HaberliJanuary 17, 2023No Comments

At the beginning of this year, I already spotted the new OneDrive 64bit client. It was a leaked version, which was not suitable for a production environment, but a good sign that the 64 bit was coming.

After the first official announcement at the beginning of April, has Microsoft now finally released the OneDrive 64bit client. And that is good news, because the 64bit version of the OneDrive client is better suited to handle large files and synchronizing a lot of files and folders.

Applications that run on the 64bit architecture can address more resources (memory, processing power), which makes them capable of processing more data. If you have synced a lot of SharePoint libraries then this will really help to reduce the number of errors that you are getting in the OneDrive client.

You can’t install the OneDrive 64bit client manually at the moment. In the coming weeks, all suitable devices (that run on a 64bit architecture) will update the OneDrive client silently to the new version. All the settings, like synced folders, are kept, so the users won’t notice anything. Only a performance improvement hopefully.

The roll-out of the 64bit client was started to the insiders’ ring at the beginning of April. The rollout for the normal users (general availability) is planned for the coming two weeks and should be finished around mid-May.

If you want to know if you are still using the 32bit version or 64bit, then the best place to check it is in your task manager.

The 32-bit version is mentioned in the process name. If you have the new version then you will only see Microsoft OneDrive.

You can also verify it in the details tab in the task manager:

We have waited long for the 64 bit version, but now it’s released we should see a performance increase when it comes to syncing a lot of folders or large files.